You are here: Home / Lifestyle / The Chronicles of Jaller

The Chronicles of Jaller is a web series created by YouTubers hbah427 (Harlan Haskins) and 7mr7random7 (Stephen Simmons). The series utilizes mostly characters from the LEGO product line Bionicle centered around Jaller (named Jaller Locobolt) and his antics with his friends and family. The series ran from July 20th, 2007 to January 17th, 2020, having seen modest popularity over the years, with a number of videos garnering over 100K views each and spawning offshoot clones and tributes over the years.

The Chronicles of Jaller stars Jaller Locobolt, a lovable robot with incredibly low intelligence. The show is comprised mostly of vignettes and skits of Jaller interacting with other characters and often getting himself injured in some way shape or form. As time went on, the series began to center around Jaller and his family members: Hewkii, Axonn, his evil cousin Kyle (represented by Barraki character Ehlek), and close friends of the characters including Black Pirahka (represented by Reidak) and Hoo (represented by Hero Factory character Mark Surge’s 2.0 model). The series became more episodically focused, centering on one storyline per episode.

The creators also created feature-length movies to tie in with the show, having created 2 feature-length ventures and a 10 episode series finale, which released from December 20th, 2019 to January 17th, 2020 (playlist shown below). The first film was released on October 30th, 2007. Originally a two-part feature, only the first part, comprising of over 1 hour of footage has survived. The second movie was released on November 17th, 2009. Both movies were uploaded to Dailymotion under the name Jaller Locobolt (formerly known as hbah427, the online handle for Haskins).

Being released at a time before the advent of internet meme culture, very little fanart for the series has been created over the years. However, tribute videos and clones appeared over time due to the series’ modest popularity during the early years of YouTube.

On May 28th, 2018, tumblr user bioniclechicken uploaded a piece of fanart in tribute to Stephen Simmons, who had been putting more focus towards his own YouTube channel (rebranded as Seven), and the main character of the series, Jaller, which he voiced. The post garnered 328 notes as of November 20th, 2020. The art itself pays tribute to the scene in the film Christopher Robin, where the titular character reunites with Winnie the Pooh. 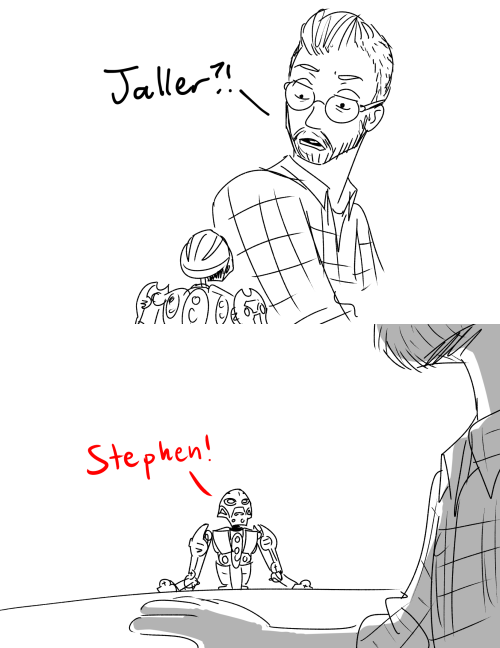 The Chronicles of Jaller series sports its own page on the site TV Tropes, listing multiple tropes executed by the show.