You are here: Home / Lifestyle / I Worked On This Story for a Year…

“I worked on this story for a year…” is a memorable tweet posted by American journalist Jared Yates Sexton in response to Donald Trump Jr.’s public disclosure of email correspondence between key members of Donald Trump’s presidential campaign and Russian businesspeople with close ties to Putin’s government, a story which Sexton had long been working on for publication in the New York Times. On Twitter, the journalist’s tweet quickly inspired a series of parodies featuring the same quote.

The meme originates from Jared Yates Sexton’s Twitter comment about Donald Trump Jr.’s Email tweet. Sexton, an independent journalist who claimed to be working on the story, weighed in. On July 11th, Sexton wrote about how long he had been working on the story on Twitter, he said, “I…worked on this story for a year…and…he just…he tweeted it out.” The tweet (shown below) received more than 39,000 retweets and 125,000 likes in just two days.

Sexton’s tweet went viral and Twitter users immediately started mocking him for working on the story for a year. This quickly evolved when Twitter users began quoting his tweet as a response to other tweets, images, and ideas.

The meme has spread throughout Twitter with users jokingly quoting Sexton as a response to less serious news related tweets.

The first known spin off tweet happened on July 11th, 2017, from Twitter user @amylopan who was the first to use Jared Yates Sexton’s tweet as a response to another tweet. In tweet, @amylopan responds to Larry King’s tweet “The more I eat Honey Nut Cheerios the more like them” by quoting Sexton, tweeting “I…worked on this story for a year….and….he just…he tweeted it out. @amylopan’s tweet reached over 1,000 likes in 2 days.

On July 12th, Twitter user @maybetomhanks tweeted his own take on the meme by quoting Sexton in a response Newt Gingrich’s tweet “McDonald’s grilled chicken mcwrap at 250 calories is both a dollar and pound bargain.” It gained over 6,000 retweets and 36,000 likes within the first 24 hours

Twitter users continue to use the phrase jokingly, using it as a response to a variety of tweets, images, and ideas. 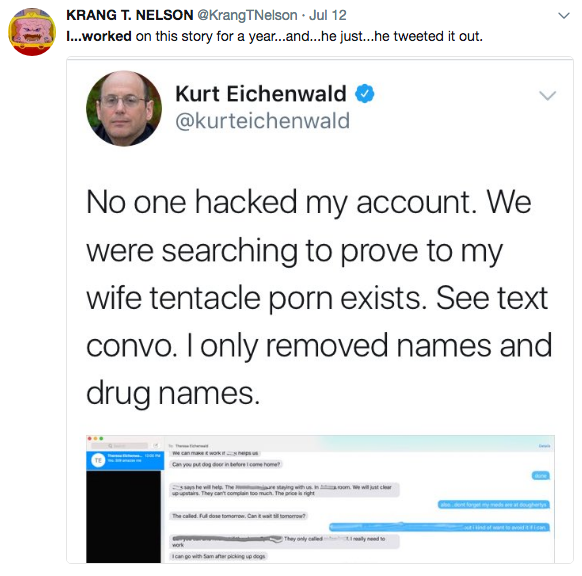