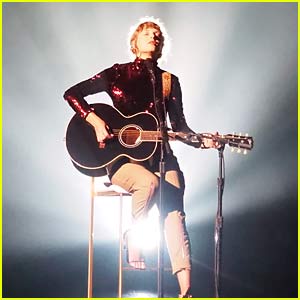 Taylor Swift is in the spotlight for her first live performance of “Betty” during the 2020 Academy of Country Music Awards, which aired on Wednesday (September 16).

The 30-year-old singer performed the song live for the first time at the Grand Ole Opry House in Nashville, Tenn.

Taylor needed to change some of the explicit lyrics in the song to make it appropriate for television. In the song’s chorus, she sings, “But if I just showed up at your party / Would you have me? Would you want me? / Would you tell me to go f–k myself / Or lead me to the garden?”

Did you know that Taylor revealed one of her celeb friends’ baby’s name in the song “Betty”?

You can watch a clip of the performance below!

We'll have you, and we want you, @taylorswift13! It is so great to have Taylor back on the #ACMawards stage. Tune-in to @CBS to watch the show now! pic.twitter.com/nchgiiYzAV