‘We haven’t even met out partners’: GMB’s Ranvir Singh shocks Susanna Reid when she reveals the Strictly contestants haven’t begun training yet despite the show starting in just weeks

By Rebecca Davison for MailOnline

Good Morning Britain presenter Ranvir Singh said that the Strictly contestants have not started training yet despite the new series starting in a few weeks.

And moreover, the celebrities have not even met their training partners yet.

The 43-year-old was quizzed by her fellow hosts ahead of her appearance on the BBC One dancing show which begins on October 24 with a launch show on 12th. 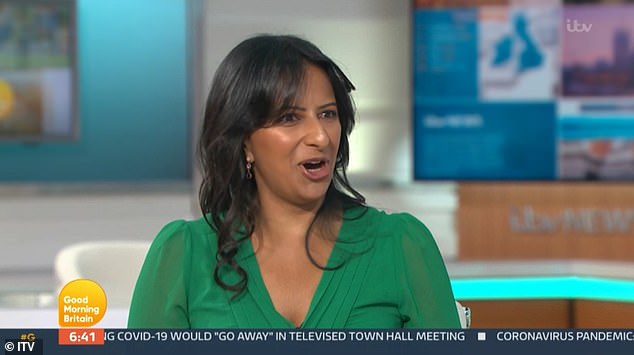 ‘We haven’t even met out partners’: GMB’s Ranvir Singh shocked Susanna Reid on GMB on Wednesday when she revealed the Strictly contestants haven’t begun training yet 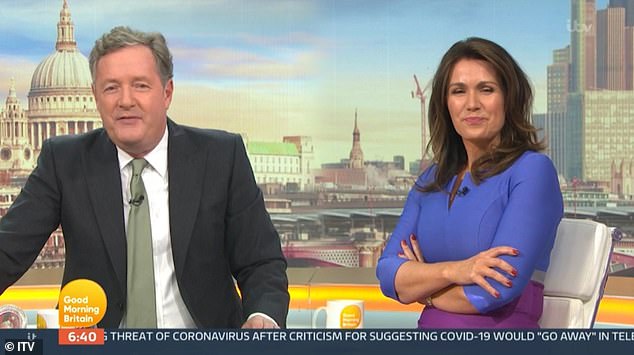 She can’t believe it: 2013 Strictly contestant Susanna said that normally at this point, contestants would be ‘up to their eyes in sequins’

2013 Strictly contestant Susanna Reid was shocked and said that usually by this point in the year, contestants are normally in the thick of training.

She said: ‘In a normal season, you would now be up to your eyeballs in training, in sequins, in glitter.’

Ranvir replied: ‘It’s all happening a bit later. We can’t – we’ve not met our partner yet.’

She added: ‘I am eating fewer Pringles if that counts towards training, but that’s as far as it got.’ 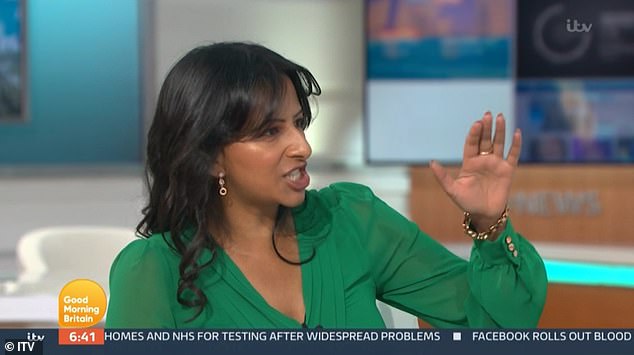 Ranvir said: ‘It’s all happening a bit later. We can’t – we’ve not met our partner yet.’ 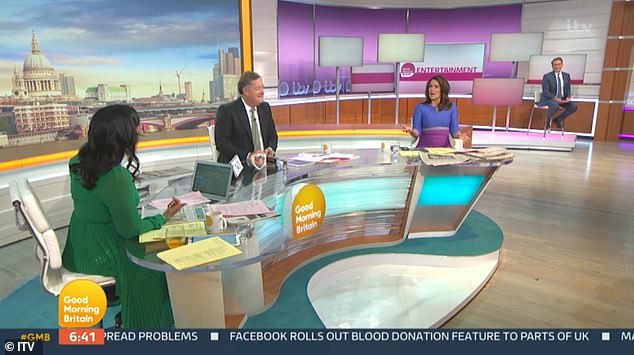 She added: ‘I am eating fewer Pringles if that counts towards training, but that’s as far as it got’

Piers Morgan asked Ranvir if she would like to be partnered up with anyone in particular and she said having a laugh was key.

She said: ‘Anyone who’s got a sense of humour.

‘The thing is, it’s to do with the height. So I’ve got to figure out who the short one is.’

Ranvir recently confirmed she had split from her husband, Ranjeet Singh Dehal, a few years ago. The pair share a son called Tushaan, eight. 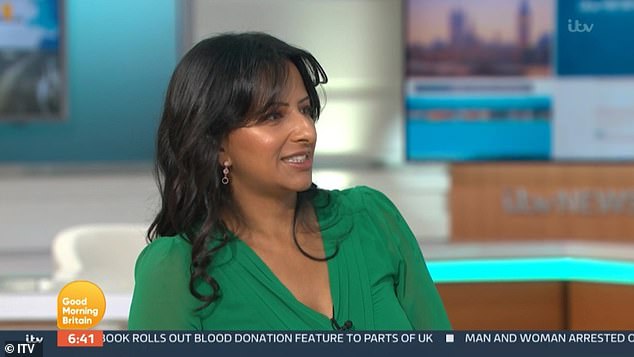 Question time: Piers Morgan asked Ranvir if she would like to be partnered up with anyone in particular and she said having a laugh was key. She said: ‘Anyone who’s got a sense of humour’

Meanwhile, it was recently reported that Strictly will operate with a socially-distanced live studio audience when the series kicks off.

The BBC One show confirmed it will return with an eighteenth consecutive series in September, and has since outlined the safety measures put in place to ensure it continues to be aired in front of its traditional live studio audience.

Producers have revealed that family bubbles of four will be allowed to watch the show while it is filmed at Hertfordshire’s Elstree Studios, while face masks and social distancing will be compulsory for all members of the public. 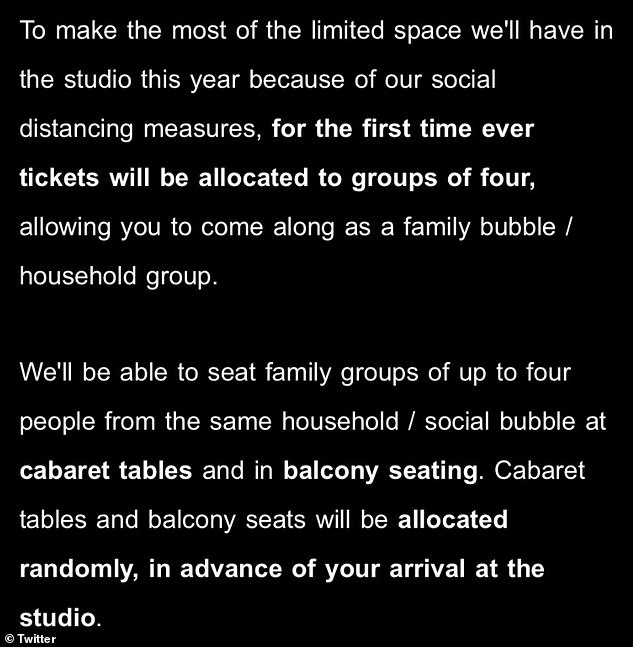 Green light: Producers have revealed that family bubbles of four will be allowed to watch the show while it is filmed at Hertfordshire’s Elstree Studios

Alleviating logistical concerns regarding the production of the show, a tweet posted on Monday read: ‘To make the most if limited space we’ll have in the studio this year because of our social distancing measures, for the first time ever tickets will be allocated to groups of four, allowing you to come along as a family bubble / household group.

While the show attempts to move on following the coronavirus pandemic, it’s understood that its annual Blackpool special – a favourite among fans – will not go ahead for the first time in its history.

Caroline says: ‘I hope my knees don’t let me down and I hope the foundation garments live up to expectations when I start leaping about!’

Fun fact: She met her now-husband, Sam Farmer in 1998 on the set of Men Behaving Badly when he was one of the studio runners.

Fun Fact: Max’s fellow The Wanted bandmate Jay McGuiness was on Strictlby Come Dancing in 2015 – and won it!

Clara says: ‘As we know this year has been a real challenge and escapism through dancing is something I know we all enjoy’

Fun fact:  Clara has some experience of celeb gameshows, having taken part on Celebrity Masterchef in 2018

Clara says: ‘I’m not Lord of the Dance, more a sort of caretaker of the dance’

Fun fact:  Bill is a classically trained musician and multi-instrumentalist

Maisie says: ‘Get me in those sequins, I can’t wait to dive into the Strictly fancy dress box this winter!’

HRVY says: ‘Being on Strictly is going to be such an amazing experience and I’m so thankful to be taking part this year.’

Fun fact:  HRVY follows in the footsteps of former internet star contestants Joe Sugg and Saffron Barker – the latter of whom is close friends with him

Jason says: ‘I am thrilled. I’m a huge fan of the show, I’ve been watching it since I came to this country, so it’s time for me to do something cool to impress my daughter, now that she can watch me perform!’

Fun Fact: Jason is the father of Girls Aloud star Nadine Coyle’s daughter. The couple were together for 11 years, only splitting recently in 2019

Ranvir says:  ‘It feels like I’m on a rollercoaster… Hopefully after the first dance I will feel exhilarated rather than sick!’

Nicola says: ‘I’m a huge fan of the show and am thrilled to be part of something that holds such a special place in so many people’s hearts’

Fun fact:  Nicola will form the show’s first ever same-sex pairing as she is parterned with a female professional.

Age: 55 Profession: Comedian and TV personality Clara says: ‘I’m not Lord of the Dance, more a sort of caretaker of the dance’ Fun fact: Bill is a classically trained musician and multi-instrumentalist

JJ says: ‘Strictly is a whole different ball game in respect to the challenges I will face but I’m up for an adventure’

Fun fact:  JJ is close friends with Prince Harry after they worked together on the Invictus Games

Profession: Made In Chelsea star

Jamie says: ‘I’m over the moon I actually get to come back and dance again. It’s going to be unbelievably amazing!’

Fun fact:  Jamie was forced to pull out of the 2019 series of Strictly after a foot injury

Jacqui says: ‘I was speechless with excitement at being asked to join Strictly – and that’s very rare for me…!’