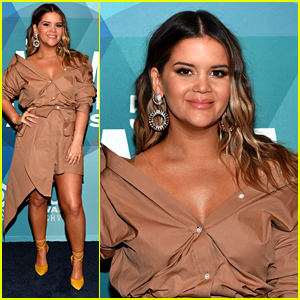 Maren Morris steps out in a cute dress for the virtual radio row events ahead of the 2020 ACM Awards at Gaylord Opryland Resort & Convention Center on Tuesday (September 15) in Nashville, Tenn.

This marks the 29-year-old singer’s first appearance since welcoming her first child, Hayes, with husband Ryan Hurd earlier in the year.

During her appearance at the event, Maren hoped that Hayes would stay up late to watch her performance for the 2020 ACM Awards.

“I don’t know what time in the show I am, but he can stay up a little late to watch Mom,” Maren says. “I don’t think it’s quite registered [to him] that the people in the TV are real.”

She also spoke about her nominations, including Album of the Year.

“This is, in a lot of ways, the last remaining piece of art that I will make with him [producer Busbee, who passed away last year], so if it received that honor tomorrow, that would be amazing,” she says.

“I’ll always treasure those years and albums that I had with Busbee. He was such a champion of my sound forming in that beginning time that we had together.”

Tune into watch Maren perform on Wednesday night, September 16, at 8/7c on CBS.