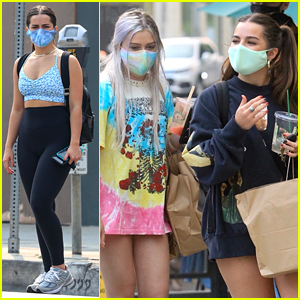 Addison Rae matches her face mask to her sports bra while going out for breakfast on Monday (September 14) in West Hollywood, Calif.

The 19-year-old TikTok star joined friends for a meal after a workout at Dogpound Gym, the same place Justin Bieber and other celebs have been going to.

PHOTOS: Check out the latest pics of Addison Rae

Addison shared a video of her meal on her TikTok account, which consisted of french toast, eggs, bacon and potatoes. Yum!!

The day before, Addison and her friend stopped by Urth Caffe to pick up some food, where she also took some photos with fans.

The week before, Addison joined some friends for a meal at Saddle Ranch, where she cuddled up with a cute puppy.

In case you missed the two big news items last week, not only did Addison hit 60 million followers on TikTok, but she’s also been cast in the upcoming gender-swapped She’s All That remake!