By Bryony Jewell For Mailonline

They seldom share pictures of their two children, Amelia and Theo, on social media.

And Dr Emily Andre, 31, delighted fans on Sunday as she posted a rare snap with her husband Peter to mark their son’s fourth birthday.

The mother-of-two and the singer, 47, are seen sharing an intimate moment in the black and white throwback picture, taken moments after their little boy was born. 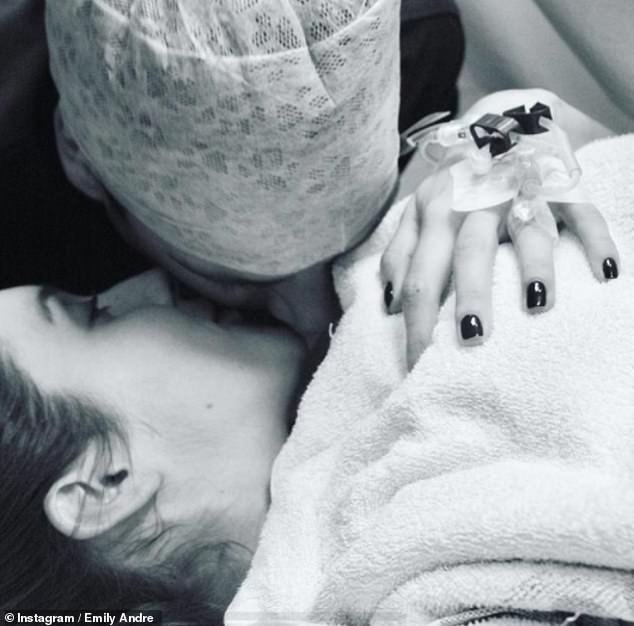 Special memories: Dr Emily Andre has shared an rare snap with her husband Peter showing the couple meeting their son Theo for the first time to mark their little boy’s 4th birthday

Emily is seen laying down while Peter leans towards her and places a kiss on baby Theo who appears to be on his mother’s chest.

Captioning the emotional image, Emily wrote: ‘I can’t believe that on this day 4 years ago we met our amazing little boy! It feels like yesterday! Happy birthday Theo.’

Doting dad-of-four Peter also shared his own sweet memory of the special day, as he commented: ‘I cried like a baby and I wasn’t the baby.’

The family made sure to celebrate Theo’s birthday in style on Sunday, with Peter sharing an impressive cake that Emily had made for the youngster. 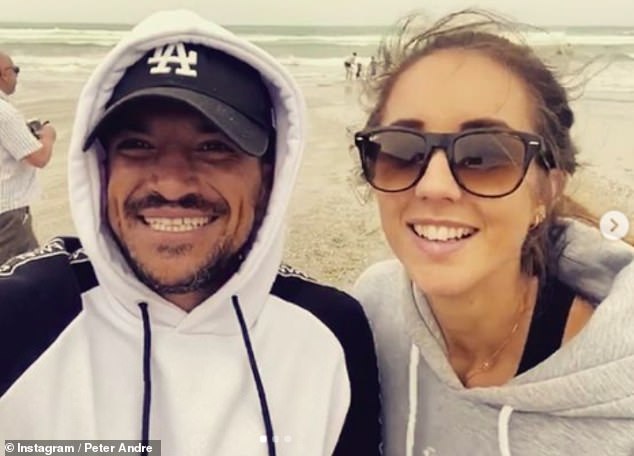 Happy couple: Peter and Emily tied the knot in 2015 and have two children together, while Peter also has Junior and Princess from his first marriage

Memories: Emily said that it ‘feels like yesterday’ that her youngest child joined the family

Doting dad: Peter replied to Emily’s post sharing that he ‘cried like a baby’ after meeting his youngest son for the first time

The impressive bake was seen covered in colourful decorations such as mushrooms and trees while a huge windmill stuck out the top.

Peter explained that Theo is ‘obsessed with windmills’ although joked that the family have ‘no idea why’.

As well as the homemade cake, Theo also had several perfectly wrapped presents to open and a bright rainbow balloon arch to complete the birthday decor.

Emily and Peter do not share pictures of their two childrens’ faces on social media however they have posted images of them with their backs to the camera before. 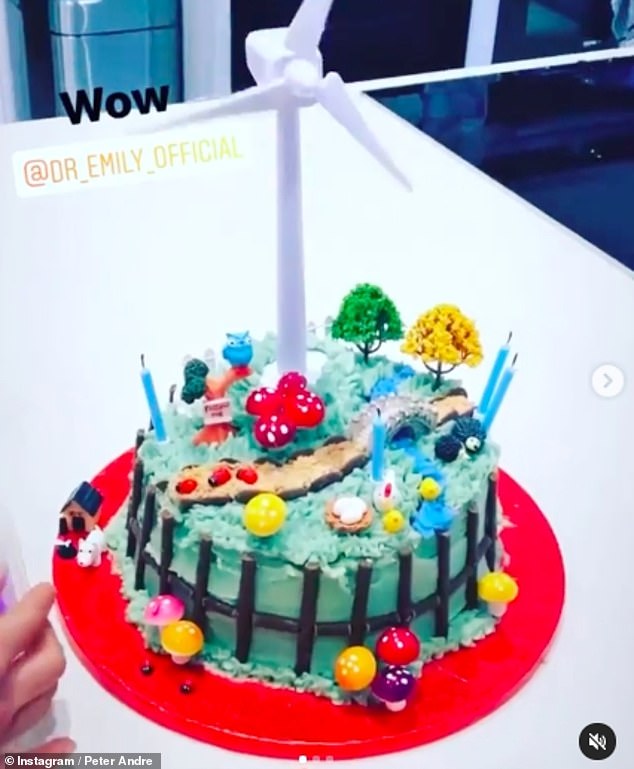 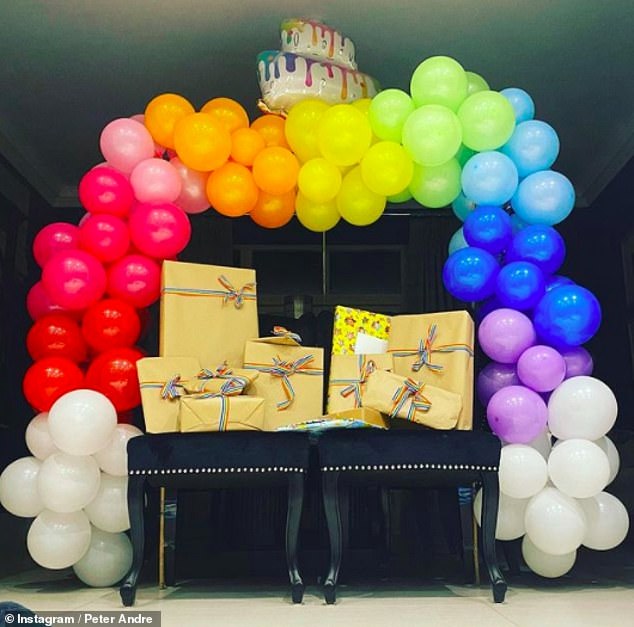 Rainbow theme: The youngster was also treated to several presents and lots of balloons

It comes after Peter shared a video of his brood enjoying their much-needed family trip to Cyprus over the summer.

And star and his wife were every inch the proud parents as their blended family held hands during a stroll through the rustic streets.

In a video posted to his YouTube channel, Peter beamed with pride as he filmed his children Junior, 15, Princess, 13, walking along with his and Emily’s daughter Amelia, six, and son Theo.

Peter shared a glimpse of his summer holiday on his new channel The Andres, and in the second video from his Cyprus series the family headed out for a walk in the quaint streets. 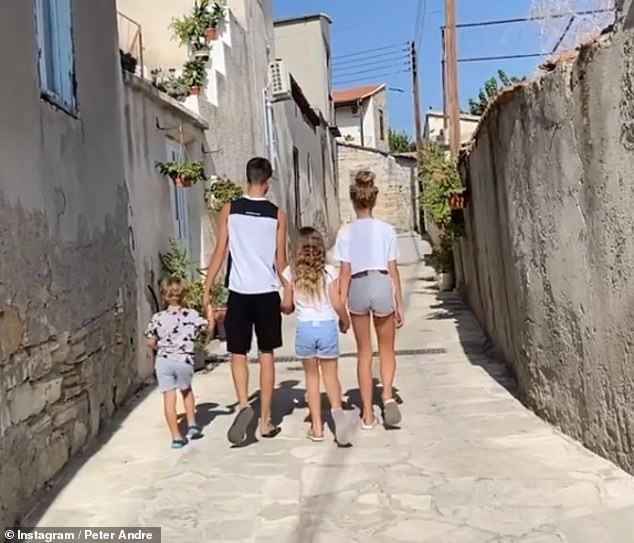 All together: Birthday boy Theo was seen in a video recently shared by Peter showing his four children walking along together in Cyprus (pictured Theo, Junior, Amelia and Princess) 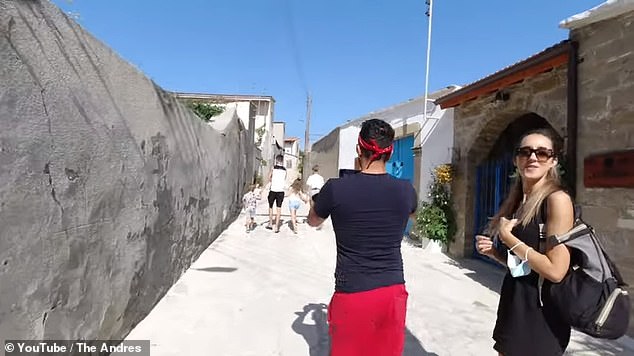 Adorable: Peter and Emily were every inch the proud parents recently as their four children held hands in a video from their family getaway to Cyprus

The star grabbed his phone to film his four children walking in unison, while Emily gushed: ‘Oh my gosh. All four of them together.’

The family got to learn how halloumi and bread was made before tucking into the delicious Greek dishes.

Last month Peter also shared a video of his family walking along together, with the sweet caption: ‘Seeing you four grow up so fast is crazy but wonderful.’

He shares Junior and Princess with ex-wife Katie Price and Amelia and Theodore with wife Emily. 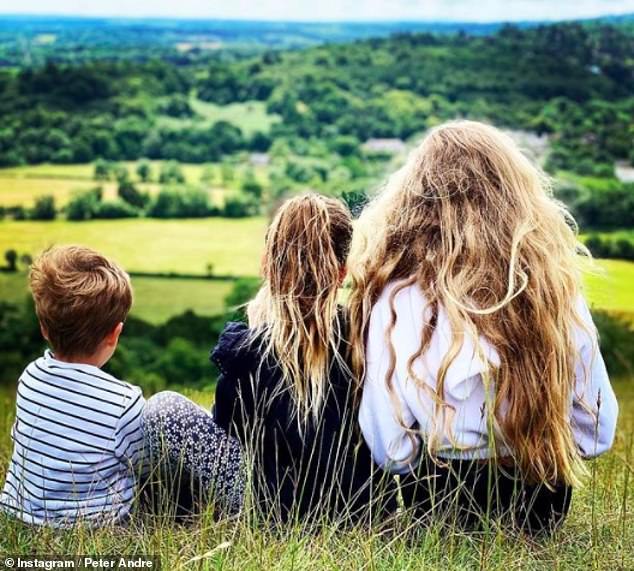 Siblings: Emily and Peter do not share their childrens’ faces online, however they have been seen with their backs to the camera or faces obscured (Theo and Amelia seen with Princess)