You are here: Home / Hollywood / Ellen DeGeneres flashes a peace sign while out to lunch with a friend in Montecito

And five days on from the ceremony, Ellen Degeneres appeared to still be riding high when she flashed a peace sign while on a lunch outing with a friend in Montecito, California.

‘Fans are everything to me. I wouldn’t be here without the fans.’ the comedian, 62, said of her success when asked about the reaction she’s gotten since her show returned following a toxic workplace scandal earlier in the year. 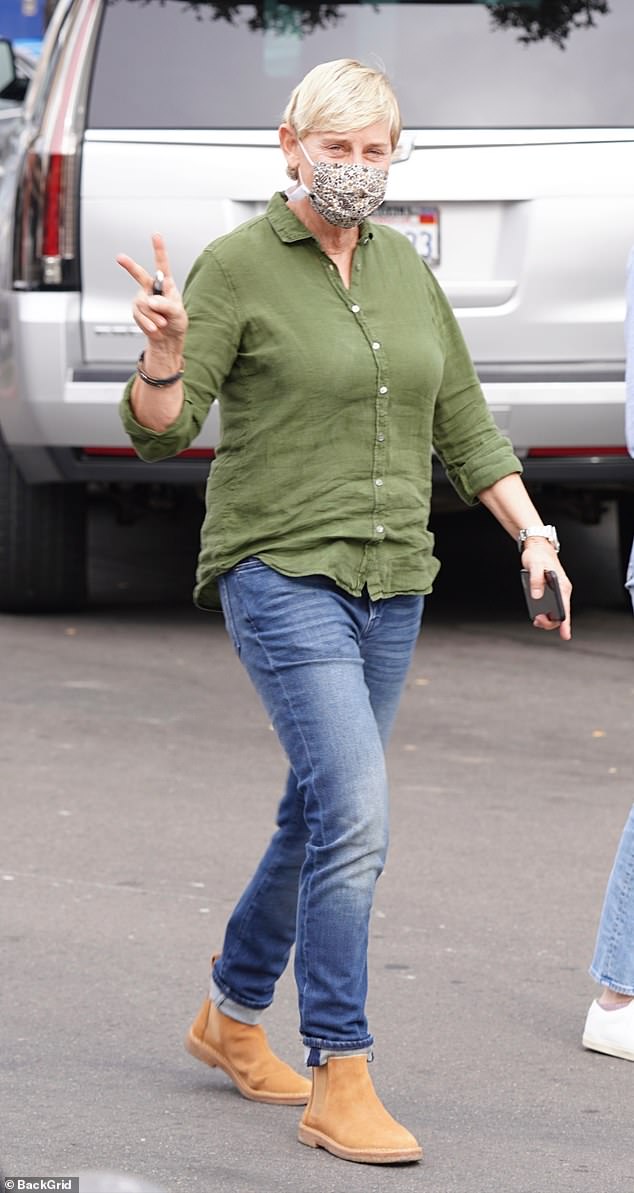 Sign of the times: Ellen DeGeneres, 62, flashed a peace sign while out on a lunch outing with a friend in Montecito, California

The talk show queen opted for a casual-cool in the fashion department dressed in blue jeans with an untucked green, button-down shirt.

She had a skip to her step in stylish, tan ankle boots as she and her gal pal walked from the restaurant back to their parked vehicle.

Her friend was similarly dressed in faded blue jeans with a blue button-down shirt, a black and white, sleeveless sweater and white sneakers.

With the COVID-19 pandemic setting record highs in new cases on a near daily basis the last couple of weeks, both ladies made sure to wear protective masks over their mouths and noses. 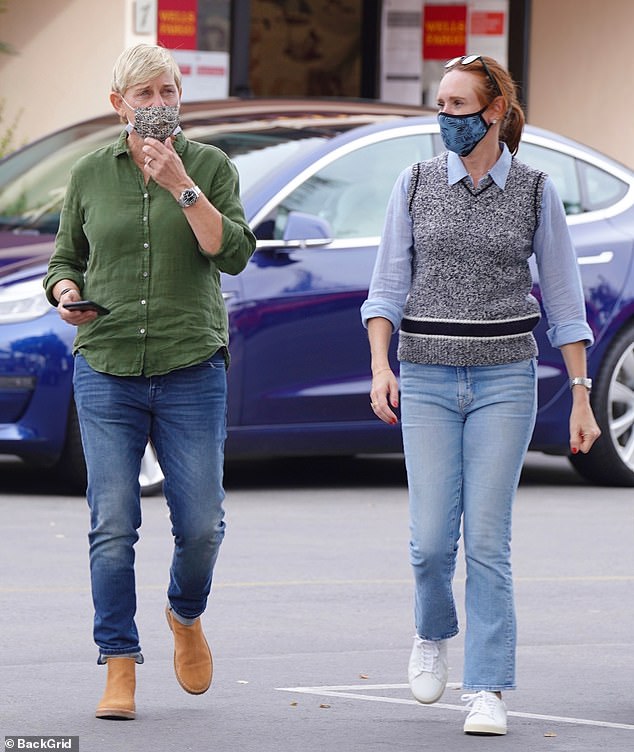 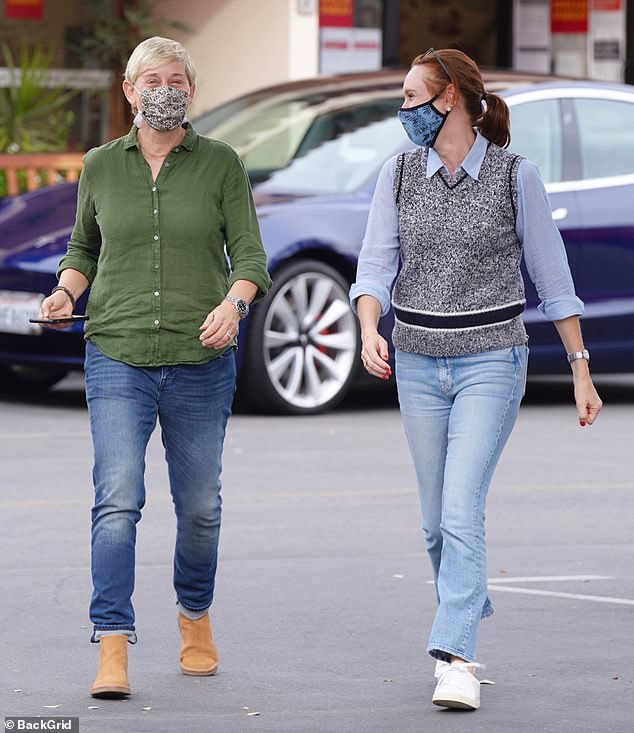 Good times: The gal pals shared a number of laughs as they walked to and from their vehicle

DeGeneres and wife Portia de Rossi are well-known real estate aficionados, who have focused a lot of their business attention on flipping homes in the Montecito area, which is just east of the city of Santa Barbara, about 83 miles north from Los Angeles.

Just over a week ago, they sold a Bali-inspired Montecito estate, that sits on 9.3 acres, for $33.3 million after it spent less than one month on the market, according to Architectural Digest.

They also sold a Tudor-style house to Ariana Grande for $6.75 million after buying it to flip in January. 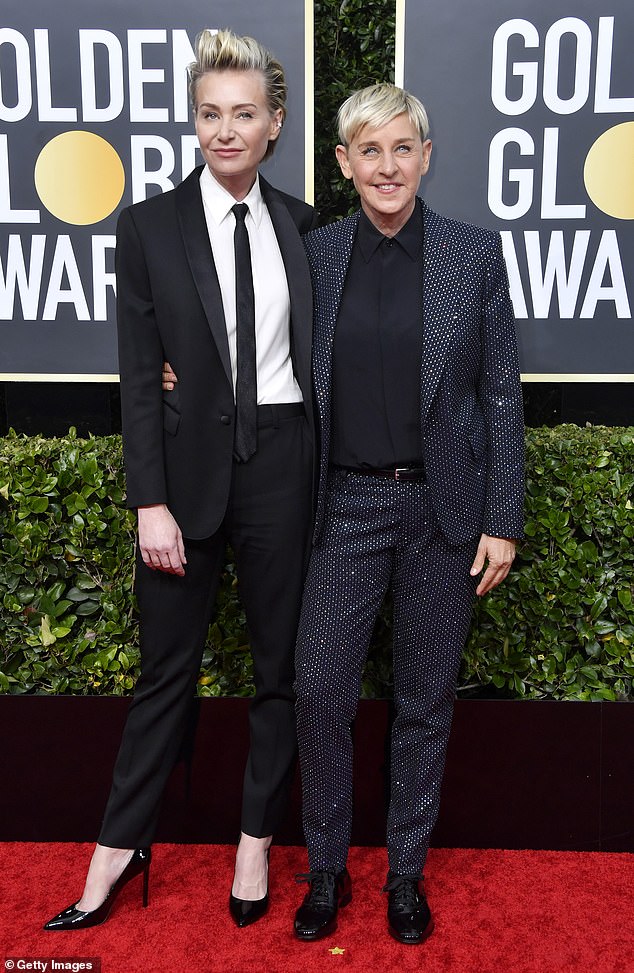 DeGeneres and de Rossi currently spend most of their home life at their Beverly Hills mansion they bought from Maroon 5 singer and television personality Adam Levine for $45 million in 2019.

Between her real estate portfolio, talkshow, books, comedy specials and lifestyle brands, Forbes lists the Louisiana native’s net worth to be $370 million, although some sources estimate that dollar amount to be even higher.

The couple have been romantically linked since 2004. After the overturn of the same-sex marriage ban in California, they legally tied-the-knot in August 2008 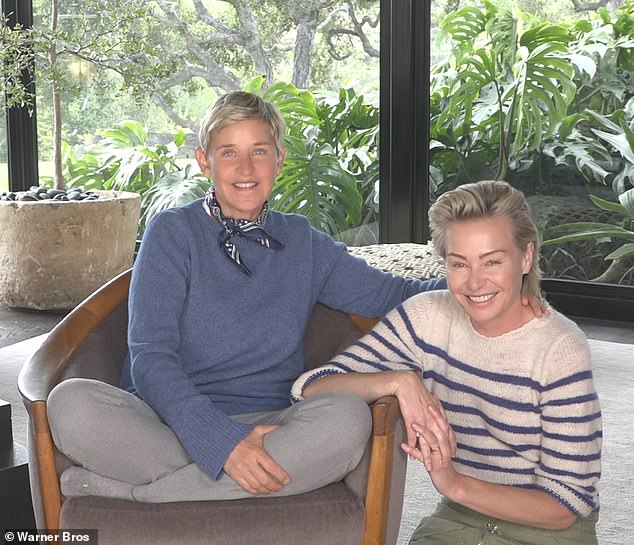 Living large: The couple primarily live in their Beverly Hills mansion they bought from Maroon 5 singer Adam Levine for $45 million in 2019

The controversy over The Ellen DeGeneres show’s allegedly toxic atmosphere was first sparked by a Buzzfeed expose into the show in June.

It revealed claims made by one current and 10 former employees of Ellen’s talk show saying they experienced racism, fear and intimidation while working on the long-running series and accusing producers Andy Lassner, Mary Connelly and Ed Glavin of bullying.

The show then faced additional accusations about sexual misconduct in a second BuzzFeed News article on July 30, in which dozens of men and women accused Kevin Leman, Glavin and Norman of sexual harassment, misconduct or assault.

Leman and Norman denied the claims. They and Glavin were promptly suspended while Warner Bros. launched an investigation.

They both were fired along with Leman. His attorney said at the time that he was being made a scapegoat.

Ellen, specifically, was accused of taking joy in making staffers cry and behaving like such a diva that employees were told not to speak.

She returned to air with the season 18 premiere in September with a six minute monologue in which she addressed the controversy.